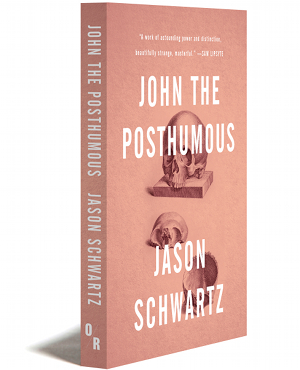 At the start of chapter 5 of Jason Schwartz’s short novel, John the Posthumous, we are told, in a brief aside, that the title derives from a Medieval French King, alive for only five days. This character is never mentioned again and any reader looking for an explanation as to why this digression should warrant the title of the book will be left frustrated, however this sort of pendent association is par for the course with this pleasingly hypnotic book.

Akin to the disembodied and pseudo – professorial documentaries of Patrick Keiller the text jumps playfully from the ancient and the etymological to the modern and meta-textual with little distinction. As in Keiller’s films, such as Robinson in Space, we are shown around a landscape that exists only on the hinterland between the abstract and the corporeal.  The source or root of a word is treated with as much attention as other story tellers lavish on the origins of their characters.